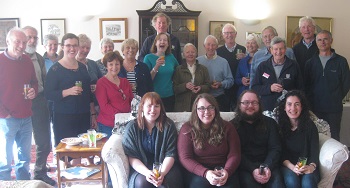 Since 2007, the castle has been operated by the community of Braemar on a 50 year repairing lease from Invercauld Estate. The Directors of Braemar Community Limited manage the castle on behalf of the village and volunteers act as guides, work in the shop, tend the garden, organise and help with Events and look after the myriad jobs that running a 17th century castle involves.

The keys were handed over to the community of Braemar in February 2007 and volunteers worked through the next year to prepare the castle for reopening. Much has been achieved, but much still needs to be done. Around half a million pounds has been raised so far. The roof is now wind and watertight and the precarious chimneys have been repaired and we are able to light fires again in the Dining and Drawing rooms, perfect on colder days.

We are now preparing to raise money, and apply for funding, to repair the harling, the rendering which covers the Castle walls, improve the grounds and build a Visitor Centre with 21st century facilities.

Formed to ensure the viability of Braemar through sustainable development.

Braemar Community Ltd was set up in 2004 to undertake the development and operation of major projects on behalf of the community.  Since then the company has been responsible for the construction of 2 new footbridges; the creation of a new footpath to link the new Cluny bridge with the A93; an investigation into the feasibility and reinstatement of the hydro scheme at Corriemulzie; the planning of a major extension to pedestrian access to the Cairngorms by a new bridge over the river Dee and the restoration of the cruck framed cottage with hingin' lum at Auchtavan in Glen Fearder which was completed in June 2008.

Membership of Braemar Community Ltd is open to all living within the Braemar postcodes. The community are encouraged to suggest projects and to take the lead role in steering such projects. Membership for full-time residents is free and for part-time residents (eg holiday home owners) there is a nominal fee.